This is my Most Awesomest Brudder Ranger, the rat terrierist.

Can you believe he was my parents’ THIRD choice? I know! Crazy but true.

Mom and dad had been married for something like 112 years when they decided to adopt a doggie. So my dad started researching different kinds of breeds to find one that was just perfect for them. And he narrowed it down to a rat terrier or some dog that only lives in a place called France. My mom said they weren’t going to France, so a rat terrier it was!

Well, they both knew they wanted a rescue dog. So mom found this place through PetFinder called Ratbone Rescues. And the nice people there had lots of rat terriers to choose from. They applied for a dog named Patches but somebody was getting ready to adopt him. Then their second choice was a dog named Peter Silver, but he wasn’t good with cats. So they finally settled on their 3rd choice who was named Joe. 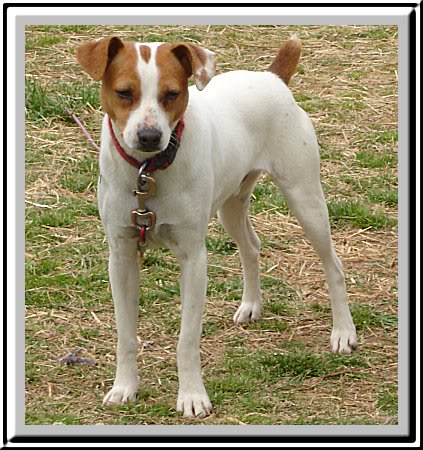 This is the first picture mom and dad saw of him. Wasn’t he the cutest?

Joe had ended up in rescue when a really terrible, tragic thing happened to his first human family. And after mom and dad talked to his wonderful foster daddy, they realized that Joe was the Most Perfect Dog for them.

And get this! He lived all the way in a place called Texas. So when they got him all adopted, he got to ride on this thing called an airplane to where we live. Doesn’t that sound exciting?

Anyway, they renamed him Ranger. And it turned out that he really was the Most Perfect Dog for them!

LIKES
Hunting rabbits
Playing with his Most Wonderful Sister (he didn’t say that but I know it’s true)
The word “go” (as in…you wanna go?)
Peanut butter
Belly rubs
Doing tricks for treats payment
Being covered up with blankies
Sleeping in

5 responses to “About Brudder Ranger”

Leave Me a Pawment! Cancel reply