Hi everybuddy! Can you believes it’s Friday already? Gosh, this week has just zoomed on by!

Now, you already know how I got rescued and you prolly already know a little bit about my adoption from my Very First Post and from the story my mom sent to the Animal Rescue Site. But there’s even more to it than that! 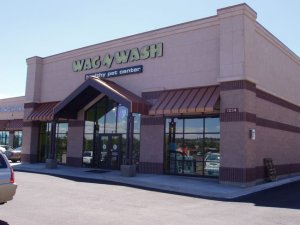 Okie doke…so after I gots to feelin’ better, my Angel Donna Fostermommy sent me to this thing called an Adoption Fair. It was at this store that sells good stuffs for doggies and kittehs. It was teensy bit scary cuz I’d never been in a place like that before and there were peoples and other doggies I didn’t know. But my puppy, Smudge, came with me so that helped a little.

On that day, my mom and dad decided they needed to gets more food for Brudder Ranger. So they stopped by this very same place that I was at! While dad was off getting the food, mom decided to go over and say hi to all the doggies.

She sat down on the floor and started petting this other doggie. (I forget his name.) And I can’t tell you why, but right off the paw, I knew that she was a sucker the one for me.

Now, mom and dad had talked about getting a brudder or sister for Brudder Ranger. But they figured it would be at least another year. And they had talked all abouts the kinda dog they wanted. My dad specially had some pretty Most Specific ideas. I told you once that my dad is a Most Great hunter. So he very much wanted a dog to go hunting with. And they both wanted a dog that was confident and outgoing and not too big and not too small and a dog that could go anywhere and do anything they wanted. Cuz they go and do lots of stuff.

Me and Mom re-enacting that Most Fateful day.

Of course, I didn’t know a single bit of this at the time. I just knew that the lady sitting on the floor seemed awful nice so I tooks a deep breath, walked over, crawled in her lap and asked her if she would please take me home.

My mom told me later that at first she didn’t even notice how skinny I still was cuz she was so taken with my eyes. She said she felt like we’d known each other forever and you know, I felts just the same way.

She asked the ladies there about me and they told her my story.  I thought for sure that would close the deal but then she stood up to walk away. I was awful scared at first that she was just gonna leave but then she called my dad over. He petted me and she told him my story and he shook his head like he couldn’t believe it. But then you know what they did? THEY LEFT! And, well, I thought that was that.

But I guess after they left, my mom couldn’t quit thinking about me. Later on that day, she told my dad that there was something about that little dog that she just couldn’t get off her mind. My dad just shrugged it off cuz sometimes my mom can get a bee in her bonnet and if you ignore her, the bee will finally go home where it belongs.

On Monday, my mom told a friend of hers, Gail, about me. Gail is a sucker dog lover too and she was Most Enabling Encouraging to my mom. So my mom wrote my Angel Donna Fostermommy an email to ask about me. Angel Donna wrote her back and answered all her questions. And that night my mom went home and told my dad what she’d done and all the stuffs she’d learned about me.

And my dad still thought maybe, just maybe, that bee would go on home.

But the bee stayed and my mom kept talking. And my dad finally said, well, maybe they could come visit me.

Now, my Angel Donna lived a million miles 3 whole hours away from where we live now. But mom and dad put Brudder Ranger in the car and they drove all that way to say hello to me again.

Oh! I was Most Excited to see them! I wiggled and wagged and they sat in the floor with me and I shyly invited dad to play a little bit of tug. And he was real sweet and didn’t pull too hard and I liked that abouts him.

Me and Brudder Ranger re-enacting when we first met.

THEN I got to meet Brudder Ranger! I was a little uncertain at first but gosh, I could tell right away he was the Most Awesomest Dog That Ever Lived. We walked around the yard and I showed him all the best places to sniff and tinkle. It was Most Lovely.

And then, if you can believes this, they left me again!! (If you can’t tell by now, they don’t make decisions very snappy-fast.)

Mom says when they left, they went and had lunch and talked a little about me. But Dad was still unsure. See, he had this picture in his head of what the Most Perfect dog would be. And, well, to tell you the truth, I wasn’t it.

So mom just let him cogitate on it real good for a day or so. As much as she wanted to adopt me, she said she knew she couldn’t pressure him into doing something so important as adding a family member. So she tried to keep that crazy bee real quiet but finally she just couldn’t stand it anymore. And so she just flat-out asked him what he had decided and he said…

So it was all settled and two weeks later – on March 28th – I went back to the Adoption Fair. But this time it wasn’t to look for the Most Perfect Home That Ever Was. It was because I had already found it and they were coming to take me there for good. And now dad says that it turns out I was exactly the dog they were looking for after all!

And it’s all because of my Angel Donna and my mom and my sweet dad and one Most Crazy bee!

Leave Me a Pawment! Cancel reply